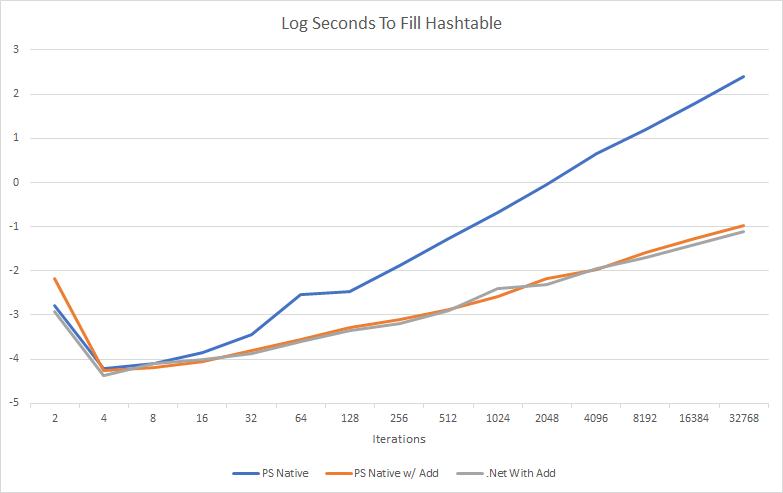 Sometimes, PowerShell is slow, especially when you are dealing with a large amount of data, but there are ways of speeding things up depending on what you are doing. This post will focus on how to speed up loops, arrays and hash-tables. All metrics were gathered in Windows 10 1909 PSVersion 5.1. Lets start with the summary.

Now for the actual metrics. You can find the scripts used under each section. For this section, we’ll look at arrays/lists. First, creating and filling.

Most methods of creating and filling arrays are fairly similar. The only noticeable slowdown is if you use PowerShell’s native array, and do not pre-initialize it. This is because on the back-end, whenever you add to the array, the computer effectively re-creates the entire array with each add.

Now on to read performance. In this test, I am just using a simple .Contains() check. While the performance does vary depending on the type of array, we are sub 1-second for 10000 iterations. This is not noticeable to humans. The only noticeable difference is if you pipe your array to Where-Object for searching. That took 11 minutes! If you really need speed though, sorting your array and using BinarySearch is the way to go.

Lets look take a look at hash-tables. Hash-tables are useful as they allow you to assign a key to an object, and then query that quickly at a later time. When adding to hash-tables though, the computer has to make sure the key being added is unique to the hash-table. This has a noticeably negative effect when using the Native PowerShell hash-table. At 22 seconds for 10000 items added to the hashtable, this is still do-able for most scripts. That said, if you add more items to it, it just keeps getting slower. A quick and easy change is to use the Add() function instead of the $HashTable += @{} pattern. If you do that, then there is no real performance difference between the native PowerShell hashtable and a .Net Dictionary.

To exemplify how slow hastables can get the more items you add, I charted it out.

Well, that is not super useful is it. All it shows is using the $HashTable += @{} is so slow, the other methods don’t even register. Lets look at that in log10 scale.

Definently make sure you use the .Add() function for any large hash-table!

For reading hash-tables, I just checked how quickly keys could be searched. Both .Net and the native method of creating hash-tables were suitably fast.

Scripts used for metrics gathering and the Excel sheet used to create charts.

Finally lets look at loop performance. If you need to perform some action on every item in a collection, you have several options. It would take large arrays to notice much of a difference in which method you use, but in my tests, using a foreach(){} loop outperformed all other methods and piping a collection to foreach-object {} had the worse performance.

Scripts used to pull these metrics